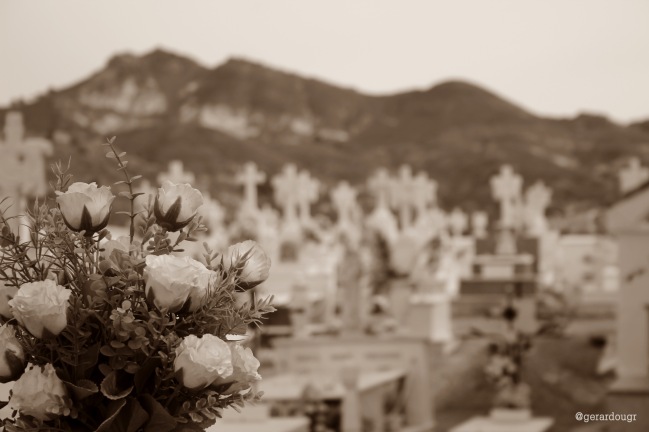 A ray of sunlight filtered through the filmy curtain of the bedroom window. Slowly, as Maria opened her eyes, she savoured the heat of her skin. The night had startled her with dreams so that she now felt an urgency to get in the car and collect her mother and Aunt Reme to take them to the cemetery. How strange! She had never felt like this before about All Souls’ Day. Yes, of course she remembered the dead, sometimes she even talked to them, but she seldom visited the graves. Maybe because the old sepulchres oozed mourning, reeked of oblivion. What a terrible smell! Yet this day she wanted to touch the marble and feel the fire of remembrance burning on the other side.

She remembered her brother.

When she raised the blinds, her smile changed to astonishment. It was a sunny autumn day, but the wind blew like never before. The fallen leaves danced madly in flaming whirlwinds. A neighbour was running about, grabbing at the clothes on the clothes-line, raising her arms to catch a skirt that was pirouetting, it seemed, to the rhythm of her anger. A tattered piece of paper flew by, drifted, ending up spiked on a fence. A crazy acrobat was walking on a rope stretched between two trees. He lost his balance and crashed to the ground. Maria rubbed her eyes, and a sweet peal of her laughter died out on the wind.

It was them! Her mother and aunt had arrived. Dead souls howled on a wild flurry of air.

Her mother swiftly got into the car with her, and Reme, always the younger sister, followed.

―Oh, child! What a horrible wind! said her mother.

―This is so, so sad, whispered the aunt― Oh, Matilde, I left the graves perfect, gleaming yesterday, and see! This is very disturbing.  The flowers are all over the place. I can’t look!

They all stared, astonished at the havoc wrought by the wind. Meanwhile the car climbed the steep slope to the cemetery. When the two got out, leaving Maria in the car, a sudden gust took off Reme’s scarf and Matilde grabbed the door-handle to prevent herself from falling. The wind subsided for a few seconds, during which they entered the graveyard, shouting words Maria could not understand. Alone by the car, she looked up.  The sky, a delicate indigo was  splashed with cloudy chiffon, embroidered with swooping seagulls. With her eyes she could not detect movement, but her body, inspired by the lashing of the wind, felt it. The souls of the dead, like birds in flight, roared with the wind. For a moment, she became as a seagull and she rose up from the earth.

When she entered the cemetery, she was surprised there were so many people there, in spite of the wind. It was sad to see so much damage: cracked jars, sponges rolling up and down the paths, flowerpots lying broken on the ground and on the tombs. Deafened by the wind, she absorbed the colours of the chrysanthemums, lilies, roses, gladioli, daisies, irises, camellias, carnations… What did it matter anyway, if the flowers were exquisitely laid out or scattered everywhere? She opened her eyes wide and breathed in a jumbled magic.

Far away she could see, like two graces, her mother and aunt next to a grave. She and went closer, struggling against the wind.

―Oh, what a shame, Maria! ―shouted her aunt as she tidied a broken pot of bright yellow chrysanthemums― This is a total wreck. What a Day of All Souls! Ah, your grandmother loved flowers so much…

– Reme darling, I think it’s best to take the flowers home for her. If we leave them here they’ll just blow away and…

But, before ending the sentence, she had to grab her sister’s arm in order not to topple over in the wind. While they complained about the damage, Maria turned to the headstone of her brother. She stared down at it, and she shivered.

―What is not remembered is as if it didn’t ever exist ―said Matilde striking a pious, solemn pose.

Maria took in her mother’s unexpected words and, plucking a chrysanthemum from the pot, she put it quietly on her brother’s grave. But the wind whipped it up and stole it away. She ran after the flower that settled on a tiny little shrine. Kneeling, breathless, she lifted the chrysanthemum and read a name traced out in golden letters. It could not be true! She had always thought Elisa was a legend.

Once upon a time there was a small child with golden hair, sapphire eyes and angelic smile. People in Candiles imagined she was a fairy and queued to see her in her cradle. One autumn night, the mother tucked her in and sang her favourite lullaby.

My child is sleepy,

Angels will bless her

Does not have a cot,

But her father’s a carpenter

He will make one

So he makes her a cot

And when she wakes up,

She can lick her sweet thumb

Elisa fell asleep. Her mother kissed her on the forehead and turned off the light. That night someone broke into the house, stole the TV, a rifle and the baby, who never returned from that caramel night. The mother completely lost her mind, and the father locked himself away in the carpentry shop. Carving cradles. As years went by, hope faded like a candle at dawn, and the family buried an empty coffin.

Maria cradled her brother’s tombstone in her arms and closed her eyes. She was sitting with her brother again, in the back of the car, driving with cardboard steering wheels. She looked at him out of the corner of her eye and smiled because they were wearing identical caps. Propelled by the wind, memories flew out the window and dissolved on the surface of the rear-vision mirror.

Maria placed the golden chrysanthemum down on Elisa’s grave, and she could hear faint laughter that was lost on the wind. Then the flower was lifted up, and it sailed off into the sky, up until it disappeared under the shadows of the seagulls.

Yes, the clouds were not coming to her. Towards heaven they flew free, with the roar of the wind.

* ‘All Souls’ (‘Todas las almas’) is a story from my collection Hijas de un Sueño (Esdrújula, 2017). This English translation is the result of a collaboration between myself and the 2016 Patrick White Award for Literature, Carmel Bird. 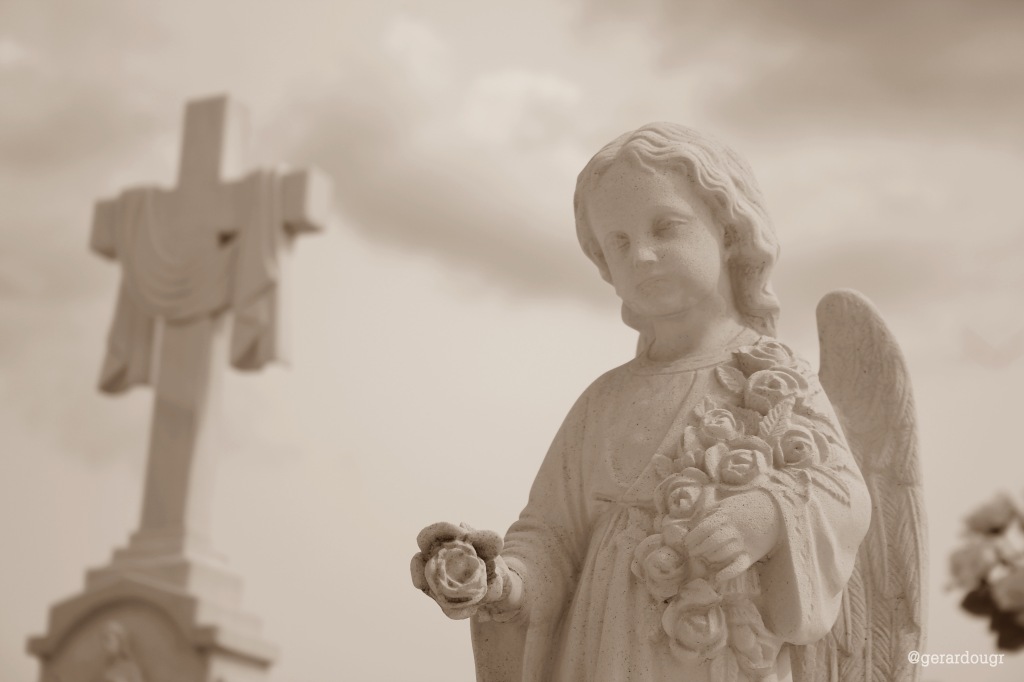